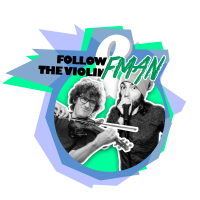 The two members of the experienced duo, Izsák Farkas and Attila Molnár Tibor, are known to the audience from numerous productions (e.g. InFusion Trio, FollowTheFlow, Tóth Vera Quartet). Their program includes covers, original songs and improvisations in Hungarian and foreign languages. Izsák is a violinist who works on expanding the conceptual boundaries of music with his violin, electroacoustic instruments and performances. He played the title role in "Fiddler on the Roof" for 6 years at Vígszínház Comedy Theatre. He is a member of several fusion, crossover, jazz and rock formations, while being a renowned musician and teacher.

Attila started out as a dancer and actor, but later became a rapper, graphic designer and event organiser, and finally a music professional. He is the lead singer of the Szeged-based band ‘Tha Shudras’ as well as a lyricist, composer, sound engineer and music producer under the pseudonym Freddie Shuman. He became known as a beatboxer under the name FMaN.